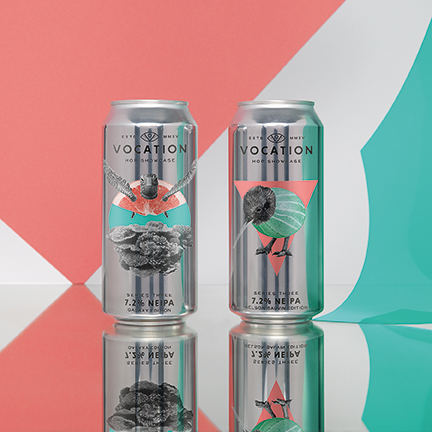 As the latest work in a five-year partnership, UK based creative studio, Robot Food have designed the labels for a limited edition series of double dry hopped beers – each showcasing the distinct character of some of Vocation Brewery’s favourite hops.

Released in three instalments, each pair of juicy single-hopped beers are brewed in exactly the same style but all contain a different hop variety. Putting flavour centre stage, drinkers are challenged to try both beers in the pair, then compare, contrast and crown their winner.

To capture the distinct personality of each hop, Robot Food chose to create six unique can designs, drawing inspiration from both the origin of the hops and the flavour they add to each brew. The team opted for a retro, collage-style aesthetic for the overall look and feel, using tropical imagery to create visual puns that celebrate the juicy flavour profiles of each hop variety. The decision to stick to the same colour combination per drop helps to clearly identify the beers as a pair and adds collectability to the series, whilst the contrasting metallic can adds a quality feel to the drinking experience.